The other night, I was fixing something at a neighbor’s house. As things wrapped up, I stepped—toolbox in hand—over the legs of their three-year-old on my way out the door. Immediately, both the neighbor and her daughter admonished me and pleaded with me to step back over them. Apparently, it’s a bit of bad luck to step over someone.

I had never heard that superstition and it prompted more than a few questions. I’d heard a few superstitions hanging out with the neighbors and apparently they take them quite seriously. I’ve rarely given superstitions a second thought.

There was one superstition they mentioned which I had never heard. It went something like this:

Never give away a purse or a wallet without some money in it, or else your own purse or wallet will be empty forever.

Clearly, this can’t possibly be true. Yet I couldn’t stop thinking about it. I’m not religious and I don’t believe in the supernatural. To me, superstitions have always been an offshoot of those two things. However, in this case, I think there’s something there, regardless of whether or not the mechanics would hold up to even the simplest scientific inquiries.

The kernel of truth that lodged itself in my brain is the paying forward of things to others (insert Kevin Spacey or Haley Joel Osment joke here). If you give away a purse or wallet, say to the local thrift store, leaving some change or a few dollars in there for the next recipient does two things:

Think about when winter rolls around (at least in parts of the world that require winter coats). For many, winter tends to bring about a case of the doldrums. Getting out winter coats and preparing for frigid temperatures and months inside can be a bleak task. But think about those times you find a few dollars stashed away in a coat pocket, a note from someone you love, or a movie ticket stub. 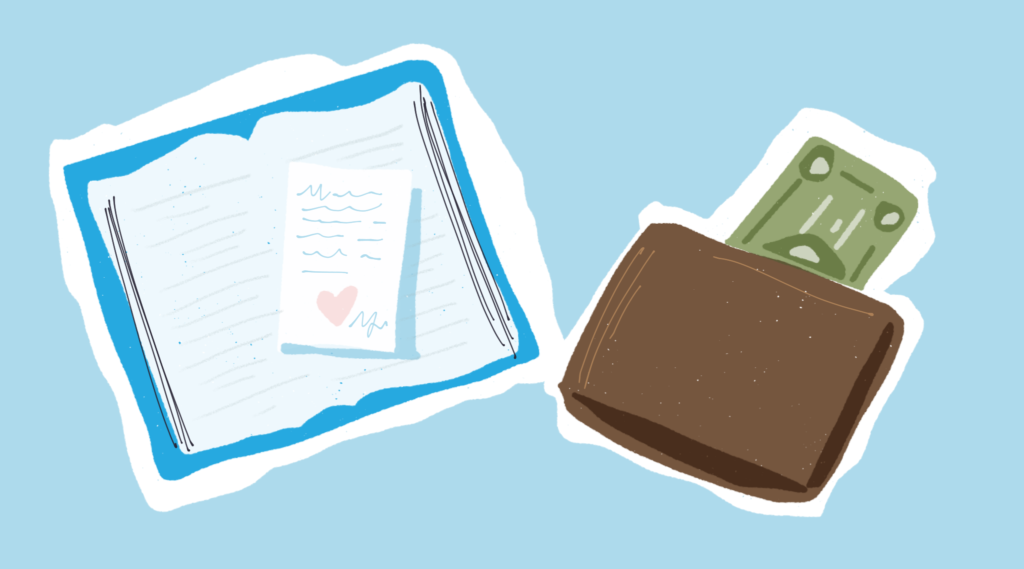 In the case of the money, you’re excited about a few extra bucks in your pocket. When it comes to notes, ticket stubs, or random keepsakes, you’re transported to the day that you put those things in your pocket. You kick up some emotions you weren’t expecting to feel and that can put into motion a string of feelings and thoughts that have the potential to completely alter the rest of your day.

Likewise, think about when you help another person. Whether it’s a small gesture like holding the door open for someone or something larger, like disassembling and reassembling an elliptical machine at your neighbor’s house at 7pm on a Friday night, it activates some of those same feelings. Suddenly, you find a bit of joy inside yourself and you’re overcome with the feeling that you did something right, something good.

Those feelings can have a huge impact on your outlook and how you approach the rest of the day. They can pull you out of the funkiest of funks. Or they can just put a smile on your face for ten minutes. One your wife or kids might notice. One that’s contagious around the house.

So, while I don’t believe in the supernatural aspects of superstitions, I think—in some cases, at least—there’s a sound underlying principle that might be worth considering. Our wallets might not always be stuffed because of the effort, but our hearts will be a bit more full, instead.

While we can’t always afford to put ten bucks into a purse, bag, or wallet when giving it away, I think leaving something behind—a little gift for the next person—is a practice worth cultivating. One that expands beyond purses and wallets.

The next time I lend a book, I’m going to remind myself to leave a nice note for the recipient. Maybe a few words of encouragement will make it into an otherwise dry email. Maybe a better tip than usual is left at a restaurant. Whatever it is—no matter how small—there’s potential there.