I remember the website that made me want to learn how to build my own. Maybe it’s familiar to some of you: 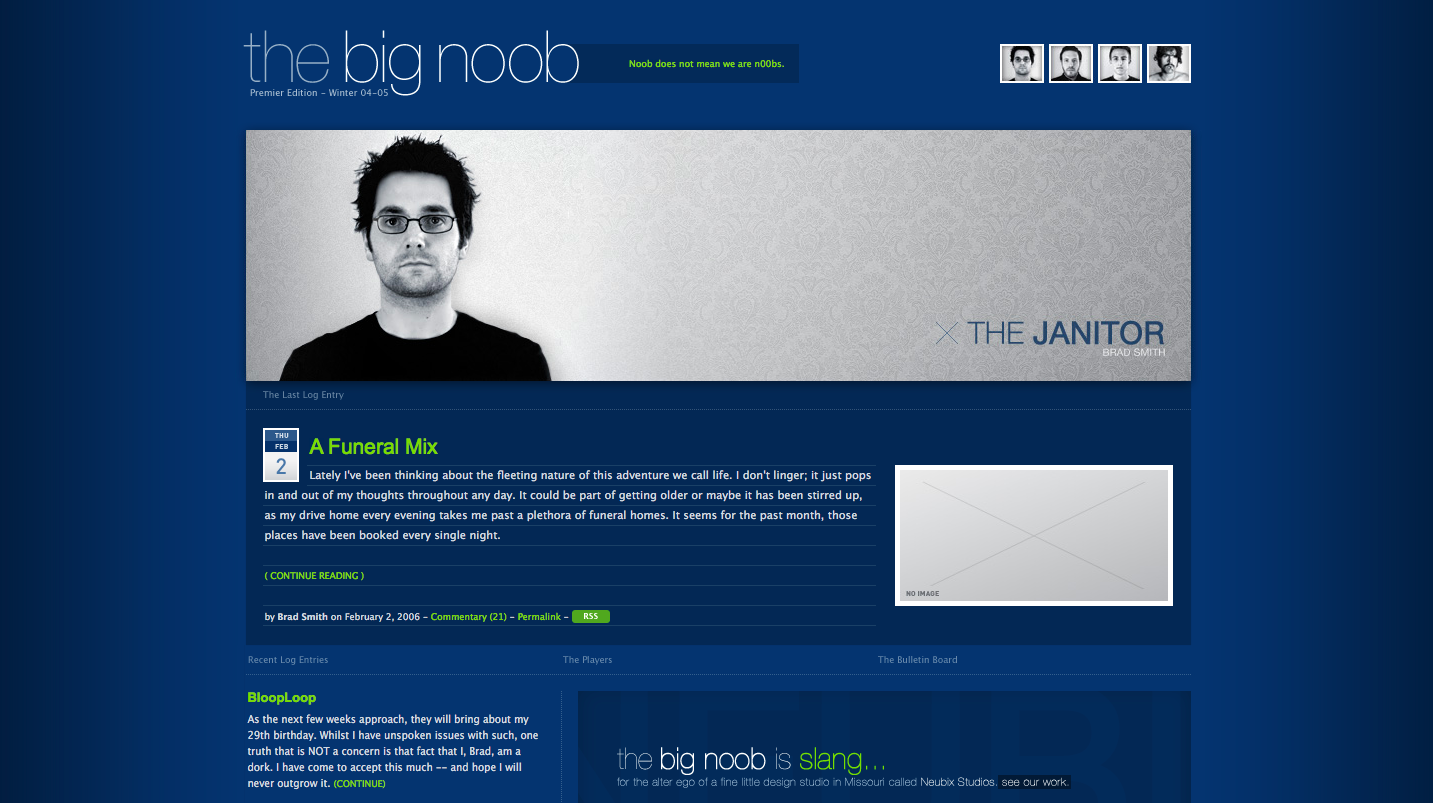 It’s the website of the now-defunct The Big Noob, a web agency run by Brad Smith, Ryan Sims, Keegan Jones, and Gerard Karnpyatch. This was back in 2006 (though I think it was around for about a year before that) and it blew (blue?) my mind. It was the most elegant website I had ever seen up until that point, and looked amazing compared to other websites of the same era. The white and green type, the dot borders, the clean grid. And that fucking blue gradient background, come on.

It even introduced the concept of the “hero” unit, which has since become a staple of the web design world.

It’s also the first website I ever used view source on.

For someone who had only ever seen shitty table-based markup and read a few tutorials on W3 Schools (we all did, shut up), this was a revelation. This was the first time I experienced clean markup, proper CSS, and things like IDs.

I spent a lot of time picking through The Big Noob: figuring out what all that clean markup meant, piecing together how to do horizontal navigation, admiring those profile pic rollovers. It taught me a hell of a lot.

Perhaps the most important thing it taught me was to dig into the things I enjoyed. View source showed me the beauty of the web. I could, with the simple press of a button, see how anything that caught my eye was made. Nothing was hidden from view and, as I got more experienced and the web standards movement gained steam, it was increasingly easy and educational to figure out how websites were built.

While I eventually picked up other learning materials, like Jeffrey Zeldman’s Designing with Web Standards and Dan Cederholm’s Bulletproof Web Design, view source was still the most powerful tool in my arsenal for educating myself as a web designer. Seeing what real web designers were doing out in the wild—inspecting actual production code—couldn’t be matched.

I sometimes long for those older days, when view source simply returned HTML, CSS, and a tiny bit of JavaScript—nicely formatted and easy to read. Although we have absurdly powerful tools to inspect the web (both Chrome and Firefox’s dev tools are insane), I wonder if we’ve lost something by complicating the web with compressed, obfuscated code, HTML and CSS written by JavaScript, and massive amounts of dependencies and assets that need to be downloaded by the browser.

Sure, it makes for a rich and powerful web, but I weep for younger web enthusiasts getting started today. This isn’t a rallying cry to adopt simpler tools (although that’s rarely a bad idea), but just some random thoughts from someone who came up in a simpler time for the web.

Anyways, thank you The Big Noob, for showing me what a clean, elegant web could look like.

Do you have a first favorite web design? The website that made you fall in love with the web and its possibilities? Email me and let me know or join the conversation over on Twitter.