Explaining How I Make Explainer Videos 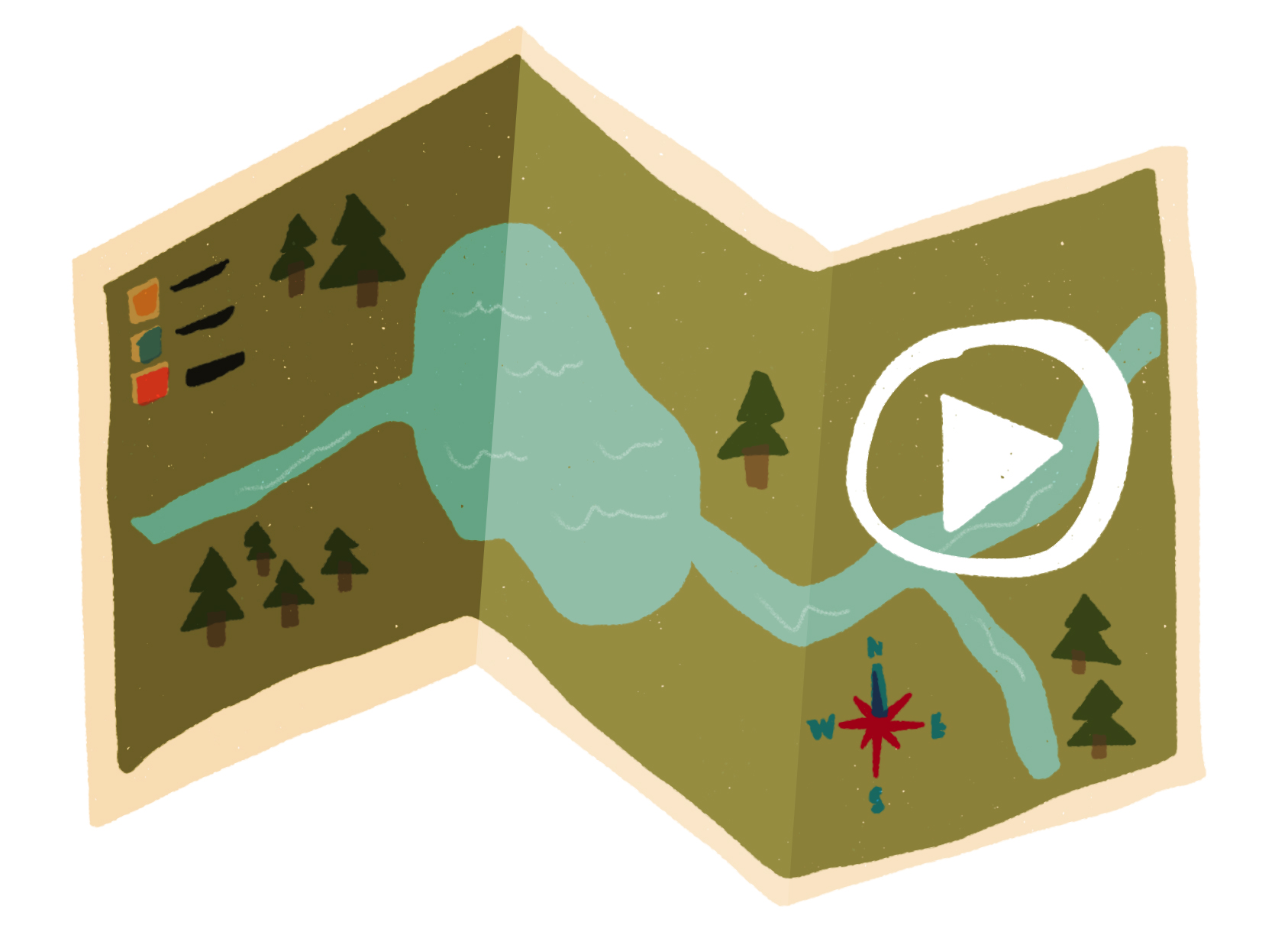 Over on the Litmus blog, I’ve been working on some quick (2-3 minute) videos to explain some email marketing and design topics. As opposed to me actually being on screen, I’ve been relying on screen recordings, custom graphics, and animations to convey key concepts.

While I’m only a couple of videos in, I’ve learned a few tricks for assembling what I hope are useful videos for email marketers and designers. I wanted to talk about some of those tricks and my general workflow today.

Everything starts with a script

The very first step (as with most things) is writing. Rather than blindly dumping graphics into a project and struggling to record a voiceover that fits with the visuals, every video begins with a script.

For these videos, which are kept between two and three minutes, that equates to roughly 1-1.5 pages in Google Docs.

The very first thing I do is outline a few of the main points I want expressed, which gives my video both structure and intent. For my video explaining email templates, that outline looked something like this:

Once that’s done, I actually draft the damned thing. The first draft is always a complete trash fire. After one or two rounds of edits, cutting as much as possible, I read the script out loud at least a dozen times. This is, far and away, the most important part of the process.

I’ve learned that the way I write and the way I speak are two distinct things. What sounds good on paper doesn’t always sound good when spoken. Reading a script out loud is the only way to figure out what works and what doesn’t.

I’d much rather figure that out early on instead of recording the actual voiceover only to find it lacking once I start editing.

After I’m comfortable with the script, I hand it off to the Litmus marketing team for review. They usually have a few great suggestions, which are incorporated into the script and read out loud before moving onto recording.

I hate the sound of my voice

Once the script is complete, I record a voiceover.

Back when I was a musician, I owned a ton of recording and production equipment. That is no longer the case (though I’m slowly rebuilding my collection). These days, I rely on a Blue Yeti USB microphone for meetings, podcasts, and recording voiceovers.

While I used to run it into Logic Pro X, I’ve found I like using Adobe Audition for these voiceovers. I have a template set up based on their podcasting preset but with some different effects. The only downside being that it took me way too long to realize there wasn’t a problem with noise and my mic, but instead it was their Speech Volume Leveler effect bringing up the noise floor instead.

I do rely on a few effects, namely the de-esser to cut sibilance, parametric EQ to selectively cut and boost frequencies, and both the single- and multi-band compressors to keep levels consistent.

Once edited, I render it to a WAV file and hop into one of my favorite programs of all time: ScreenFlow.

ScreenFlow, for the uninitiated, is a program billed as screencasting software. While this is true, in that it allows you to record your screen and edit the resulting video, it is so much more than that.

ScreenFlow hides within it surprisingly powerful tools for editing, animating, titling, and annotating video. While their tools have always been great, their most recent update adds some fantastic features, including new motion curves, better animation tools, and animated GIF exports.

I start every video by dumping the audio into a project along with our licensed music. I typically leave around 8-10 seconds of music at the beginning and end, which leaves enough room for titles and an outro, for which I have a basic template set up that I just copy from video to video. 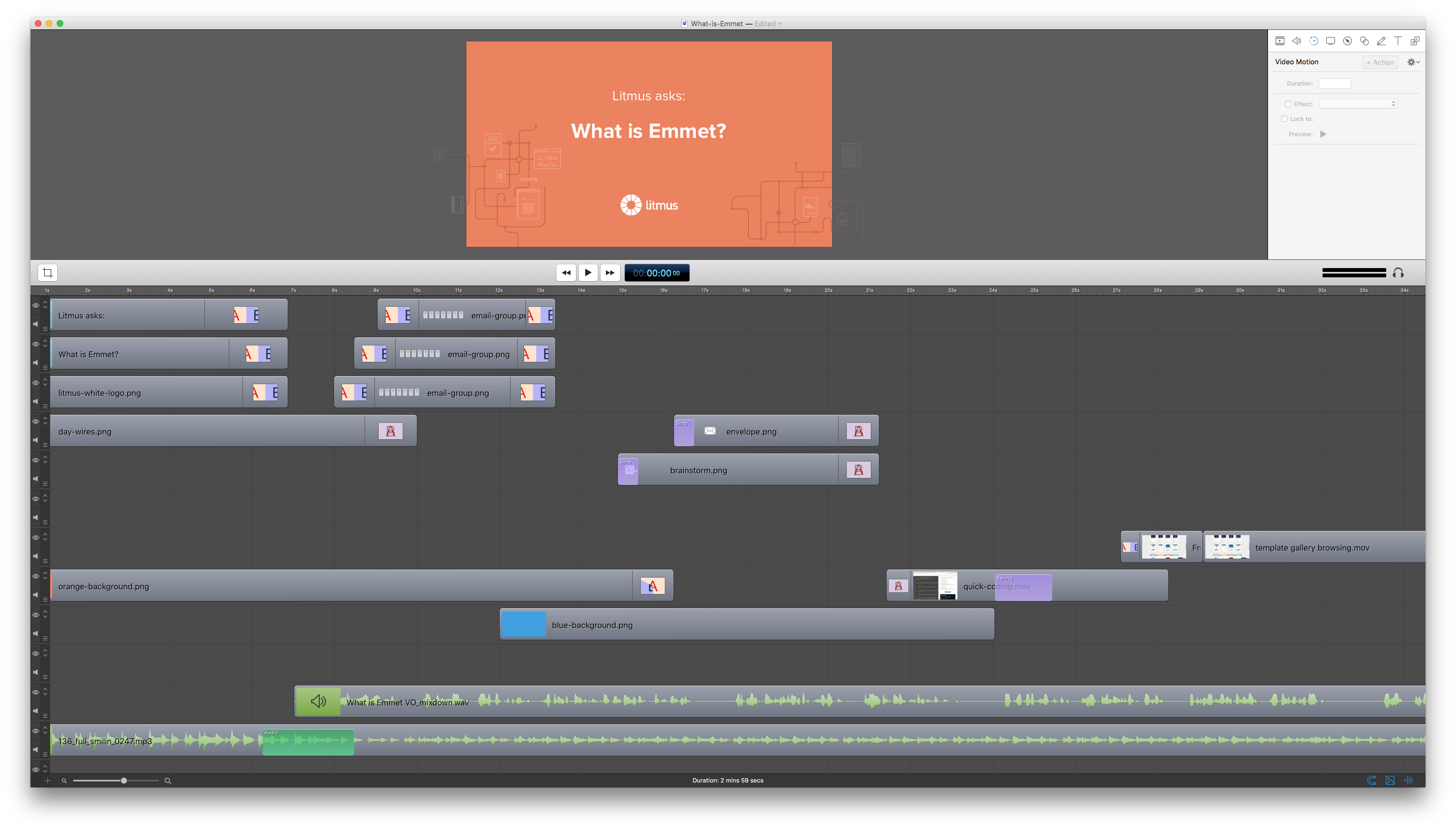 After adjusting the music levels—I don’t use ducking but rely on audio actions instead—I listen through a few times and start jotting down ideas for how to illustrate the concepts in the video. These notes vary in degree of details, ranging from “screenshot of website” to “animate a clock-like wipe to illustrate the concept of time, use illustrations or icons to represent the two ideas”.

I then start plugging away at these ideas, creating graphics, grabbing screenshots/videos, and animating as necessary. I usually finish up the easier stuff first (screenshots/videos) before tackling the more complex animations and graphics.

So far, most of my graphics have been created in Sketch. I really like Sketch’s implementation of artboards and use them to quickly set up different ideas for the graphics. For the “What is Emmet?” video, my Sketch file ended up looking like this, excuse the terrible naming and organization: 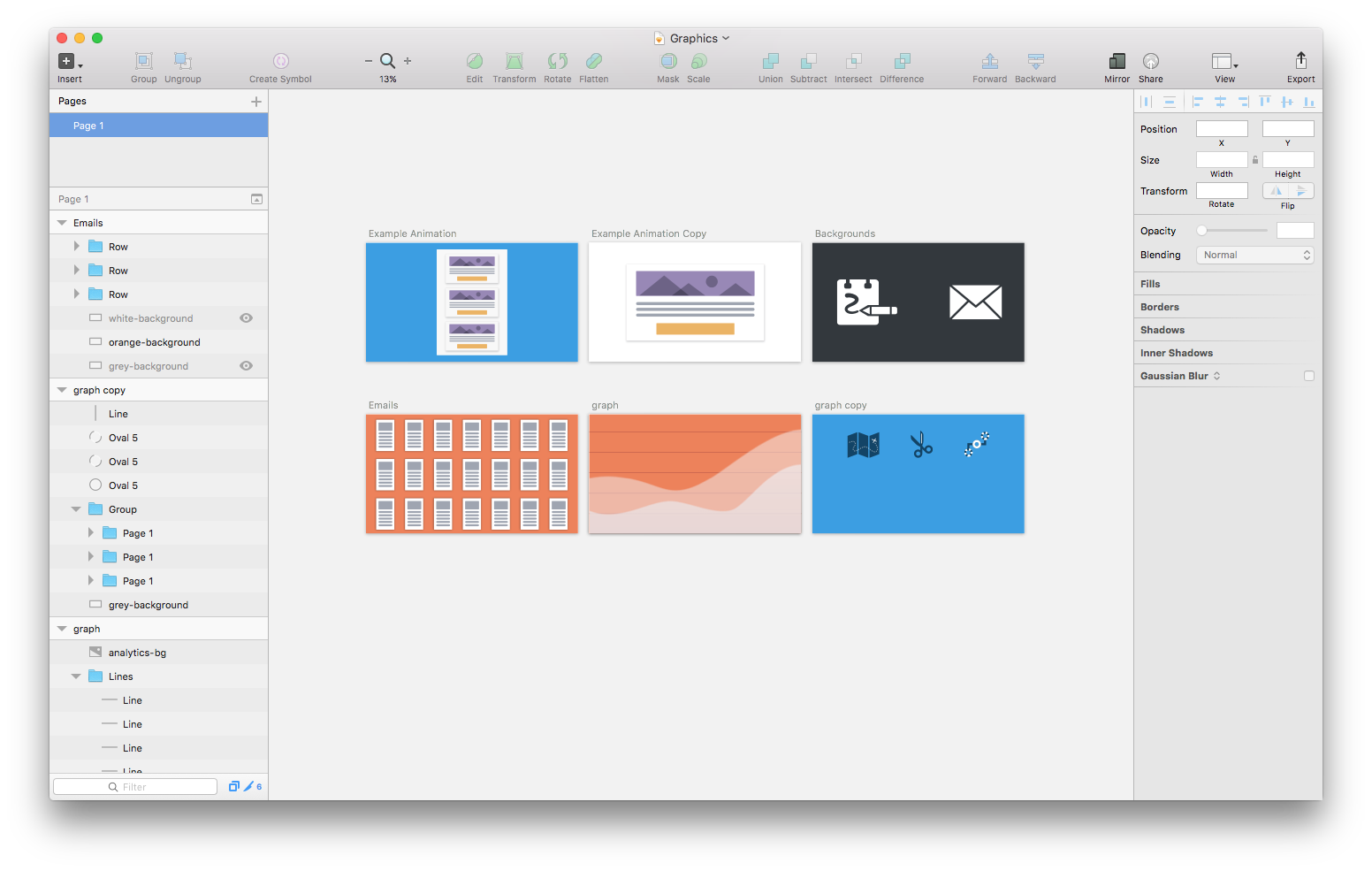 I export files as needed, and have found that positioning them on HD video-sized artboards and exporting the full artboard is easier than trying to slice out just the parts of the artboard that contain the graphics. When you throw them into ScreenFlow, everything is placed where it should be and sized properly.

For my first video, I actually used Keynote for a lot of the animations. Keynote has a some really good animation tools and I found creating more complex animations a bit easier than doing something comparable directly in ScreenFlow. I also really like “pop” animations and, until recently, ScreenFlow lacked the necessary tools to get a graphic popping just right.

The problem with using Keynote, though, is dealing with timing. Since you’re not working on the same timeline as your audio and other clips, it’s hard to get animations to sync up with the inherent beats in your voiceover and music. You can time the hell out of things in Keynote, down to the millisecond, but it’s a lot of trial and error, saving and importing, to get it working well in ScreenFlow.

For the Emmet video, I ditched Keynote and did everything in ScreenFlow. Their new Video Motion Actions add some really useful effects like gravity, spring, and pulse, which allow you to fine-tune animations for more natural and interesting looking motion design.

Things can get a bit complex, but I still find working in the timeline and layers of ScreenFlow a much better experience than Keynote’s Arrange and Build Order modal windows.

Here’s what my timeline looked like for one of my more complex animations. 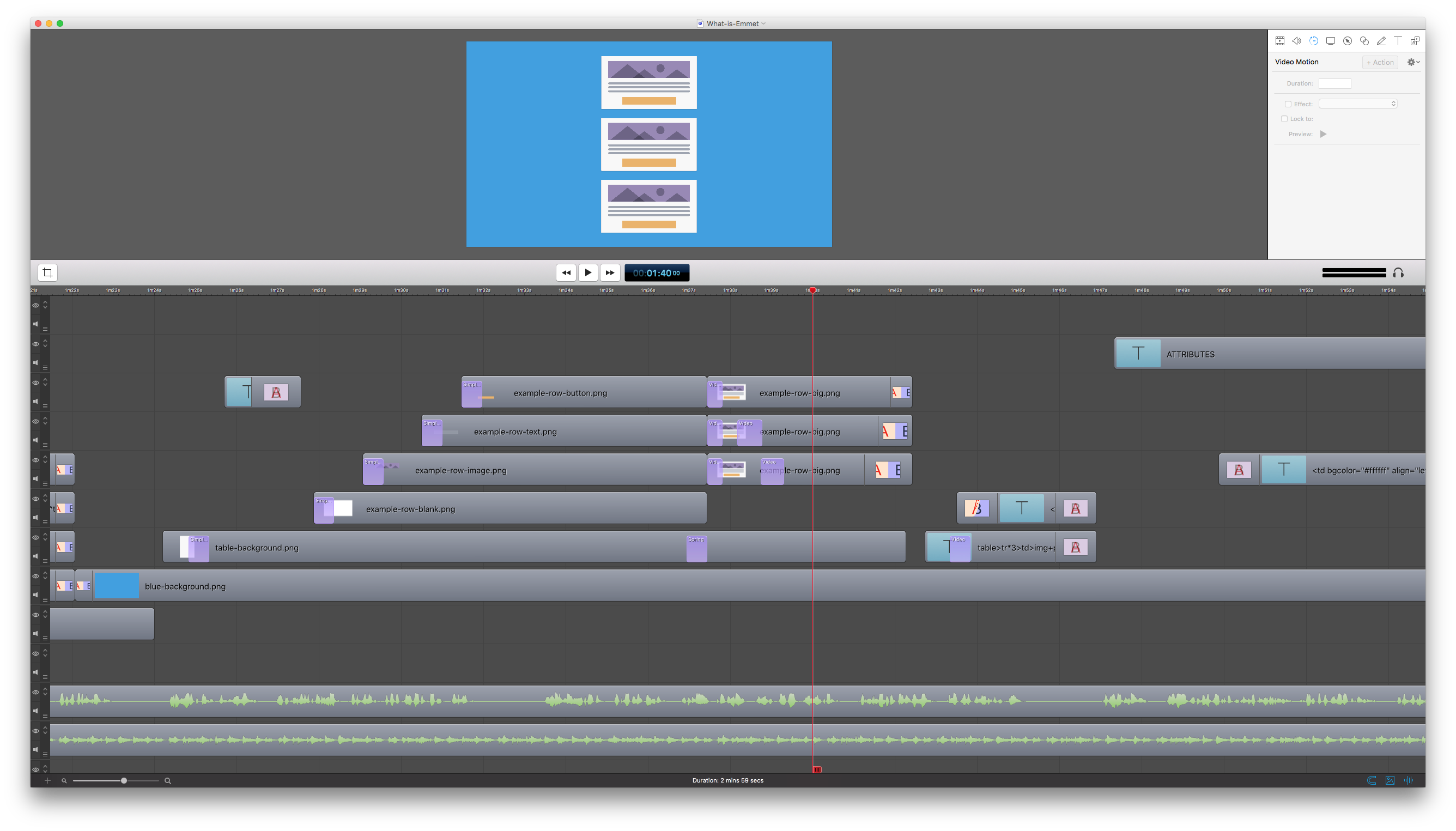 Once I have the entire video wrapped up, and I run it by my wife and two daughters to make sure I didn’t do something stupid, I export using ScreenFlow’s “Web - High” preset, scaled to 100%, and with Motion Blur.

At Litmus, we host everything with Wistia, one of my favorite companies. I usually run the finished video by one or two people to ensure I didn’t miss anything before passing it around to the entire team, uploading to our blog, and publishing.

So much room for improvement

While I’m pleased with my results so far, I’m just getting warmed up. There is a lot that I want to improve in these videos.

Some things are more technical, like setting up better default templates for audio, video, graphics, and animation. I’d love to refine the effects on my voiceovers so that they sound truly professional. I’d also love to learn a bit more about video formats and encoding just to understand what’s going on when I export something.

Other things are more conceptual. The main thing is working on better visuals that more clearly illustrate abstract concepts. I feel like some of my graphics and animations are too obvious—I’m sure I can come up with better metaphors to explain those ideas.

I also want to explore different storytelling techniques to get points across, or experiment with different video styles to teach concepts. I recently read what has become one of my favorite books, Jessica Abel’s Out On The Wire, which deals with storytelling in radio. The book is wildly useful for any creative medium, including writing and film. I’m itching to figure out a way to work some of her ideas and lessons into explainer videos like this.

The main thing I’ve learned while tackling these projects is that I absolutely adore creating these videos. They hit on all of my major interests: writing, audio production, illustration, and video production. I can’t wait to produce more (good thing we have a list of videos on the books) and share them with everyone.

Along the way, as I pick up more tricks and refine my techniques, I’ll be sure to share them here. There’s nothing better than writing about a new passion. Maybe I’ll even make some videos about the process, too ;-)